On the Politically Re-Active Podcast
Meet my son, the comedian W. Kamau Bell
and learn more about his TV shows.
Listen to Janet Cheatham Bell on the World Footprints podcast. 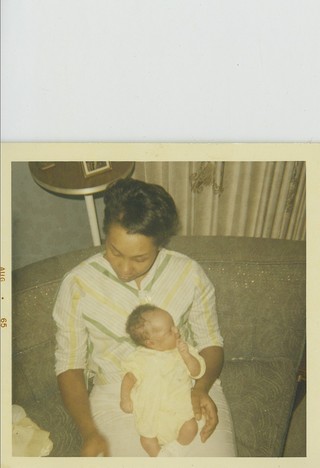 Me, with straightened hair, holding my two-month-old nephew, Miguel.

MY APOLOGIES FOR BEING LATE WITH THIS INSTALLMENT, BUT I WANTED TO ADD SOME PICTURES BEFORE I CONTINUE WITH THE STORY. THIS FORMAT, HOWEVER, ONLY ALLOWS ONE PICTURE AT A TIME. TO SEE ALL THE PICTURES, YOU'LL HAVE TO WAIT FOR THE BOOK.

The same month that I moved into my new place, on September 18, my cousin Diane Beanum married Jesse Merriweather and asked me to coordinate her wedding. Diane lived in Romulus, a two-hour drive away; her mother, Zeffie, was my dad’s sister. Diane was younger by five years and had grown up in Michigan, but we knew each other well because our families had exchanged summer visits when we were children.

I didn’t know a thing about coordinating a wedding, but thought it might cause bad feelings in the family if I refused. Rosie had had a coordinator for her spectacular wedding, but Rosie, herself had directed everything, so I figured having a “coordinator” was more of a status symbol than anything else. I was a librarian, so I could have researched the duties of a wedding coordinator, but it didn’t seem that complicated to me. So, not wanting to refuse and thinking it wasn’t that important, I agreed to coordinate Diane’s wedding and drove over to attend the rehearsal.

As best I can recall, the rehearsal did not go smoothly; there were too many people giving orders. Aunt Zeffie, a dominant figure in any setting, had specific ideas about how her only daughter’s wedding should go. Diane, no wallflower herself, also knew what she wanted and I, the “coordinator,” was consulted only when nobody had any idea what the protocol was for a specific instance. I usually didn’t know either, but offered my opinion as if I did. On the day of the wedding, I was so nervous and insecure about my role that I arrived late to the church as the procession was about to begin. As flustered and confused as I was, I contributed very little. My best hope is that I didn’t totally botch Diane’s special day.

While I was writing this I asked her what she remembered of my involvement, but either she recalls less than I do, or she’s too kind to talk about it. Tellingly, Diane has no pictures of me at the wedding although we agree I was there.


I got an A in Loving’s class and wanted to take another course from him. However, he would only be teaching on Michigan’s main campus in Ann Arbor. He told me about a Saturday morning class I could take there if I didn’t mind the drive. Hmmmm. If I took a Saturday class in Ann Arbor I would be out of Saginaw on the weekends! Driving the eighty-five miles to Ann Arbor after work on Fridays would be easy. I could spend the night with my relatives in nearby Romulus, and attend class on Saturday mornings. Who knew what might happen on Saturday night? This had definite possibilities! The Michigan campus would have tons of fascinating people, as well as lots of well-read black men. Whatever was going on there had to be better than Saginaw.

When I told Sue about my plan to take Loving’s Saturday class, she called a friend of hers who lived in A2 (the nickname for Ann Arbor). Sue thought Gloria would be a good contact since I didn’t know anyone there. Gloria immediately offered to have me stay with her when I came to town on the weekends. Perfect! I'd much rather be in Ann Arbor than driving over from Romulus.

Gloria's welcome was so warm, I felt instantly comfortable. She was blond with some assistance, fortyish, also divorced, and had two teenaged children, whom I rarely saw. She was also active in the local CORE chapter and I was thrilled when she invited me to join her at a CORE party the following weekend. Could I have asked for anything better? This was exactly what I was hoping for!

CORE (Congress of Racial Equality) was riding high in 1965. The civil rights group had been founded in 1942 by a mixed group of students on the campus of the University of Chicago. They organized to desegregate public accommodations in Chicago, and after that succeeded they went national. Their biggest fame came when they tested the legality of segregation on interstate bus travel in the South with their Freedom Rides in 1961. Because of CORE's origins, its members were largely black and white college students.

Gloria was white, but I knew there would be plenty of black folk at a CORE party. That meant I could easily meet some fine activist brother. I knew Ann Arbor would be an improvement over Saginaw. In those days, we dressed to look our best for parties—blue jeans had not become de rigueur for every occasion. When I packed for that second weekend in Ann Arbor, I included an outfit that always got lots of compliments: a chocolate-brown double-knit jacket and skirt that I wore with a brightly-colored print blouse. I wanted to look so good that the brothers would feel like Monarch butterflies who’d spotted a zinnia.

When we arrived at the party, every room on the first floor of the spacious house was filled with people. Yes! The majority of those in attendance were white, but just as I’d hoped there were also lots of brothers. Gloria introduced me as we circulated. Whenever I met a brother, I flirted demurely, but none of them so much as made eye contact. Sometimes one looked longingly at Gloria, but all I got was a polite acknowledgment. Not one of the brothers expressed even the slightest curiosity about me. What was going on here? Never had I been in a social gathering in which I was completely ignored by every man in the room. After about an hour of this, I stepped back to scope the situation out.

Interracial partying was a new experience for me because I was accustomed to whites and blacks avoiding one another socially. On Indiana University’s campus there was occasional cross racial dating, but I’d never been to a mixed party. I'd already noticed that the crowd was largely white, but in looking more closely, I saw that among the hundred or more revelers there were a number of black men, but only one other black woman (Evelyn K. Moore, later co-founder and president of the National Black Child Development Institute). And every brother there was either huddled with a white woman or eying one. I was definitely not what the brothers were looking for. Interracial dating, furtive for so long, had erupted in the civil rights movement like Mt. Sinabung, the Sumatran volcano that had been dormant for four hundred years. And the brothers were taking full advantage.

Well, fine. Two can play that game—I’ll talk to the white guys.

I’d dated white guys before, so this would not be unfamiliar territory. After my divorce, I dealt with my feelings of rejection and isolation by welcoming new experiences, and in the process began to reinvent myself, or more accurately, to be myself. My marriage and that deferring-to-others’-desires phase of my life was over. I was completing my degree and about to become my own self-sufficient woman, so I plunged into a life that didn’t resemble anything I'd done before. I was eager to explore, take risks, do whatever I wanted, and stop allowing other people’s, including my parents’, expectations to run my life. Look out world! I made new friends, many with people who didn’t look like me or share my assumptions, beginning with the young women from Thailand, Taiwan, and Hong Kong with whom I shared a rooming house.

A former classmate, Jessie Reiss, a Jew from New York, became a dear friend. When she dated a rugby player, she introduced me to one of his teammates. John was a tall blonde from England, and the first white man I went out with. It was not awkward at all. We had long, wide-ranging political and philosophical conversations similar to the ones I’d had with Rickey Singh, a Guyanese man I’d met earlier. I recall telling John during one exchange that growing up in Indianapolis I had only a limited number of hooks on which to hang information; and that I was now installing additional ones. In one of my summer classes I met Gerry, a white-bread American from suburban Chicago, and we went out a few times. All of this dating was more fun than serious. Mama had trained me well not to trust men, saying they were mostly deceitful and unfaithful; we regularly referred to them as “doggish.” My failed marriage simply reinforced my caution, so I was leery of men; and my experiences with racism made me especially wary of the intentions of white men. I craved masculine energy and the company of males, but I kept my heart to myself.